We have chosen Unity for cross platform mobile game development,
we see how powerful Unity Editor is,

now it is time to test our code and scene.

I will not discuss these concepts, their scope or why they are needed. Instead I will tell you what we are doing in our Unity games. 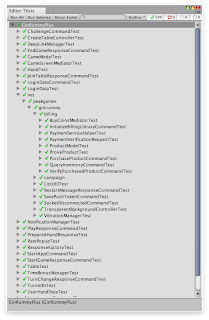 Unity does not have build-in support for unit testing. But there is a package in Unity Asset Store called Unity Test Tools created by Unity itself. Actually it is an open source project that you can also contribute. If you integrate that tools into your project, you would have the ability to write unit tests in your project. These tools are based on NUnit library, a well-known unit testing library for .Net languages. More information about NUnit can be found on http://www.nunit.org/.

Your unit tests should be placed under Editor folder (it is a special folder in Unity projects). The runner will scan the assemblies (including external assemblies included in the project that reference nunit.framework library) and generate a list with tests that were located. The tests are executed in the editor, in non-play mode, all in one frame. It is not possible to skip a frame and/or execute an API that requires skipping frames.

The code you execute via the test runner will directly affect your currently opened scene. For example, if you instantiate a GameObject, it will be persisted on the scene. Most of the times such behaviour is undesired. Unity prevents to have unit tests on attached scripts (MonoBehaviour scripts). That is why having a Dependency Injection (DI) or Inversion of Control (IoC) framework makes our code decoupled and testable. Having clear separation on game logic and game scene (views) is helping us a lot to have enough test coverage. Our unit testing strategy is try to cover all game logic, and complex logic calculations, not the views and screens.

Unit Tests are there to check your individual units are working correctly. But you still have to test if these individually tested units can work together. Unfortunately you can not just test your custom units together, you have to involve internal UnityEngine functions. So we are using Integration Test Framework inside the Unity Test Tools. 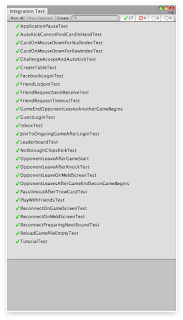 The Integration Tests are designed to run on a separate scene. You can consider the scene where you place your tests as a test suite. One test scene can contain multiple tests. Unity suggests not to put your tests on your production scenes. Instead, create a separate scene for them.

There are two ways of creating integration tests. Manually by creating a test scene and adding some assertion script on this scene. Or dynamically (from code) by marking a MonoBehaviour with an attribute that make it loaded by the test runner. For more information please refer to official documentation.

We are using dynamic approach to be able to create our integration tests programatically. Because we don't want to create a separate scene for testing purposes. It is very important to be able to test actual production scene with actual user behaviours. We just want to simulate a user playing the game and make assertions while the real play is ongoing in the real game scene.

Although this framework is not designed to use actual game scene, we could manage to make it happen. And we could manage to simulate user actions like button touches or card throws etc...  It opens us whole new possibilities. And we gradually improve our integration test suite, here it is the evolution steps:

There is another test a developer should do after (or during) every development. Actually this is not an automated test. Yes, I am talking about manual testing. You should not just rely on automated tests especially during the development. You should absolutely, without any doubt, test what you are coding. I think we all agree on that.

Manual testing is testing what you are doing like you are the user of that feature. And sometimes you are developing something (implementing a feature or fixing a bug) deep inside the the game. Let's say your are developing the result popup that is presented at the end of a card game. And there isn't one single mode of that result popup. It can change according to game type (solo or regular), game result (win or lost) etc...

The first thing that came to mind is, just write a temporary test code to create that popup with given result model. And try it over and over again. And change the model and run it again to see how it is behaving with this model. It is not a bad approach. You can see some commented code pieces just for testing purposes (most of the case they are out dated) in almost all software projects.

But with Unity Editor there is a better way. You can create a custom editor specific to your needs. By doing that you can test all cases with a single run, and also you don't need to change the real production code with temporary codes. So you don't need to comment out that test code, which means it will live with the project and always up to date. So it can be usable whenever you needed.

So these are the main testing practices that we are using during Unity game development. If you have any comments or additions do not hesitate to comment on this post. Because now I am moving to debugging in Unity.